I’m a huge fan of the “Getting Things Done” technique from David Allen. I’ve been following it for most of my professional career, and I attribute it to being capable of stay organized and on a mission with my full-time activity and writing right here at 9to5Mac. 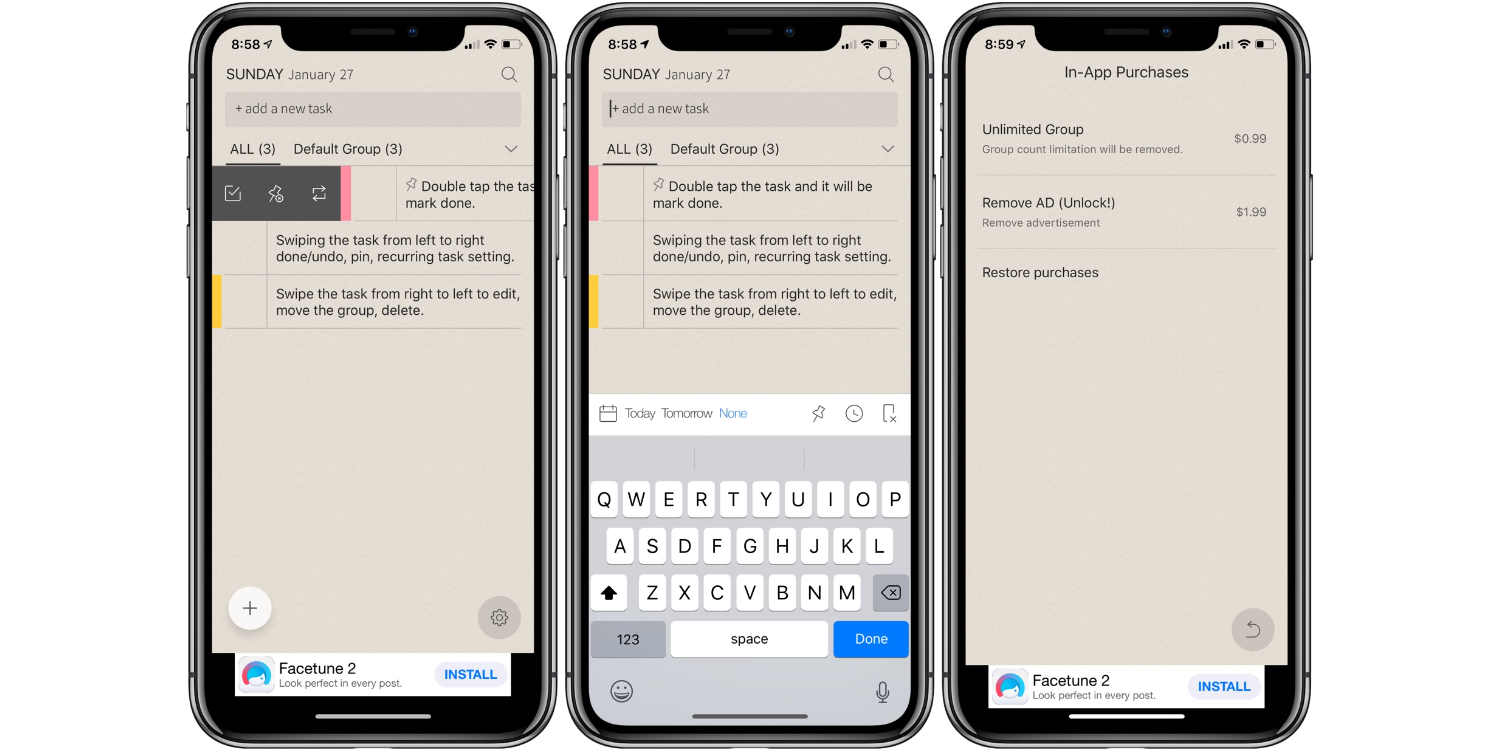 With that being stated, I don’t place the entirety in my GTD app. There are many items like grocery lists, home repair plans, or even simple weekend duties that end up in a list app. I need it to be smooth to feature too, easy to mark off, smooth to organize, and sincerely get out of the manner. It’s the heaviness of my GTD app that permits my easy list app to be light. I’ve tried a group of apps, so right here’s my spherical-up of the great listing apps for iPhone. I’ve written approximately Apple Reminders in the past, and I suppose it’s one of Apple’s most underrated apps. It works properly, helps multiple lists, and syncs over to all your gadgets. If you’ve got Apple Family Sharing installation, you’ve already got shared lists among your own family members as properly.

I formerly wrote that one characteristic Apple wishes to feature is natural language input.

I currently use Todoist to manipulate all of my duties. One best element is their natural language input. I can type Print off-price record #Work Tomorrow at eight AM. Todoist will then put the mission in my Work project with a due date of the day after today at 8:00 AM. While the macOS model of Reminders has herbal language aid, iOS doesn’t. I’d love the macOS to get an app-huge app to communicate field where I didn’t just pick the list ahead of time. With Todoist, I set up a short cause for new duties and positioned it into the proper vicinity without each touching the trackpad. The one knock for Reminders, for my part, is that it’s gradual to add new obligations and create new lists. Its layout is asking dated, so I desire it gets some attention within the near future. Apple Reminders is really worth taking a look at because it’s unfastened and syncs over iCloud.

Contents Summary show
Do!
Do! is a free app on the App Store.
CARROT To Do
Any. Do
MinimaList
Clear
Wrap-up

Do! is an interesting-looking app. It has a paper feel (it reminds me of Apple Notes), but it’s not overly skeuomorphic. It’s fairly simple to add new tasks, but the overall app is not one of my favorites. I found the user interface to be confusing especially compared to Apple Reminders. It’s a free app, and it includes in-app purchases to remove ads and to have unlimited groups.

Do! is a free app on the App Store. 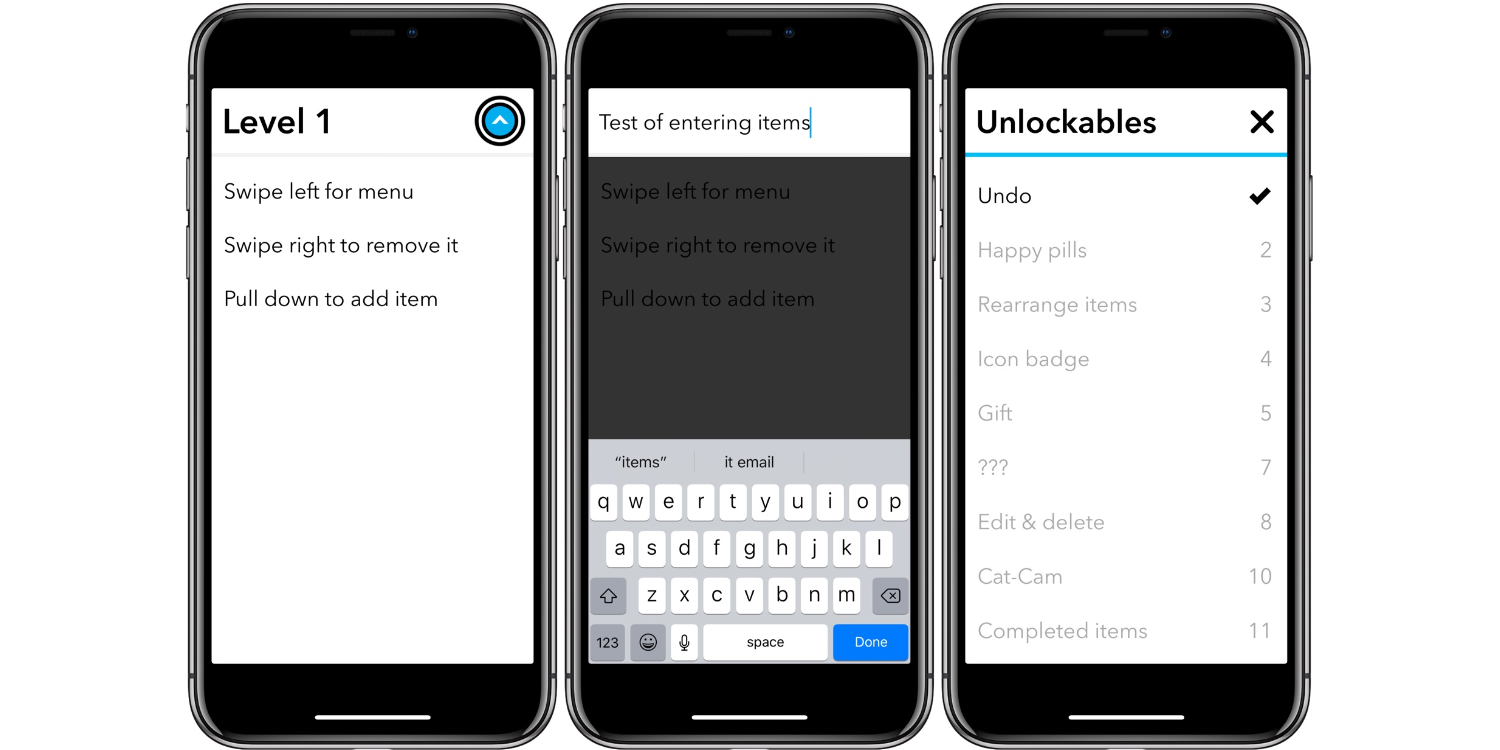 I love CARROT Weather, so the design of its list app immediately worked for me. Like all of the CARROT apps, the to-do app has “personality.” You “please” the robot by marking things as complete, and as you do, you unlock new features. While I think this is a pretty fun way to unlock features, I’d rather be able to make a small in-app purchase.

One negative to the app is that it doesn’t offer an option for multiple lists, and this fact alone would keep me from using it for a simple iPhone list app over some of the other apps I tried. The app still does lack native support for iPhone X and newer screen size as well.

CARROT To-Do is a free app on the App Store. 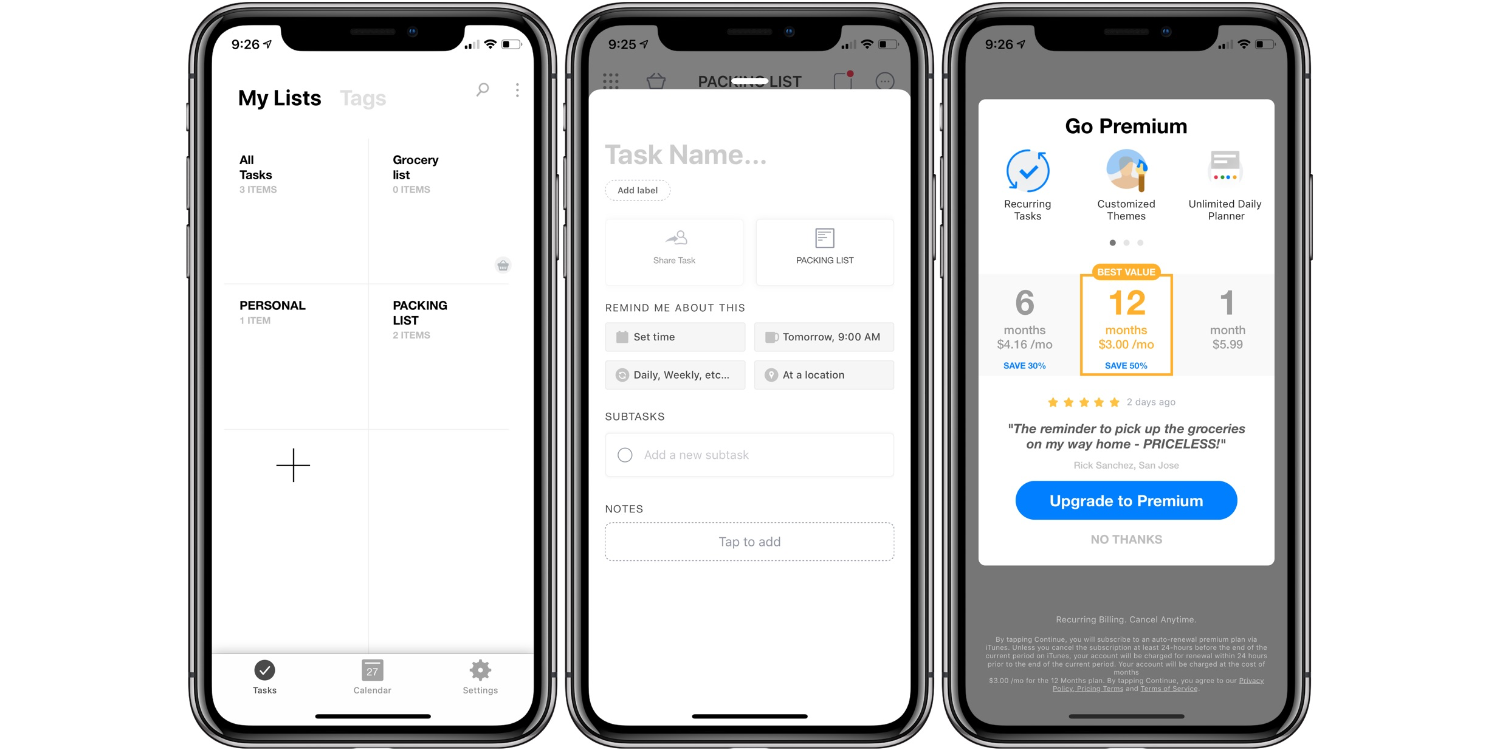 Any. Do is a free app with a subscription for unlimited collaboration, recurring items, location-based reminders, and more. It’s a really great-looking app, but it’s overkill for what I want in a simple list app, though.

One of my favorite aspects of the app is how multiple lists are broken out. If you are looking for a new task system, I would definitely check out Any. Do. But when it comes to a simple list app for iPhone, I feel like there are better options. 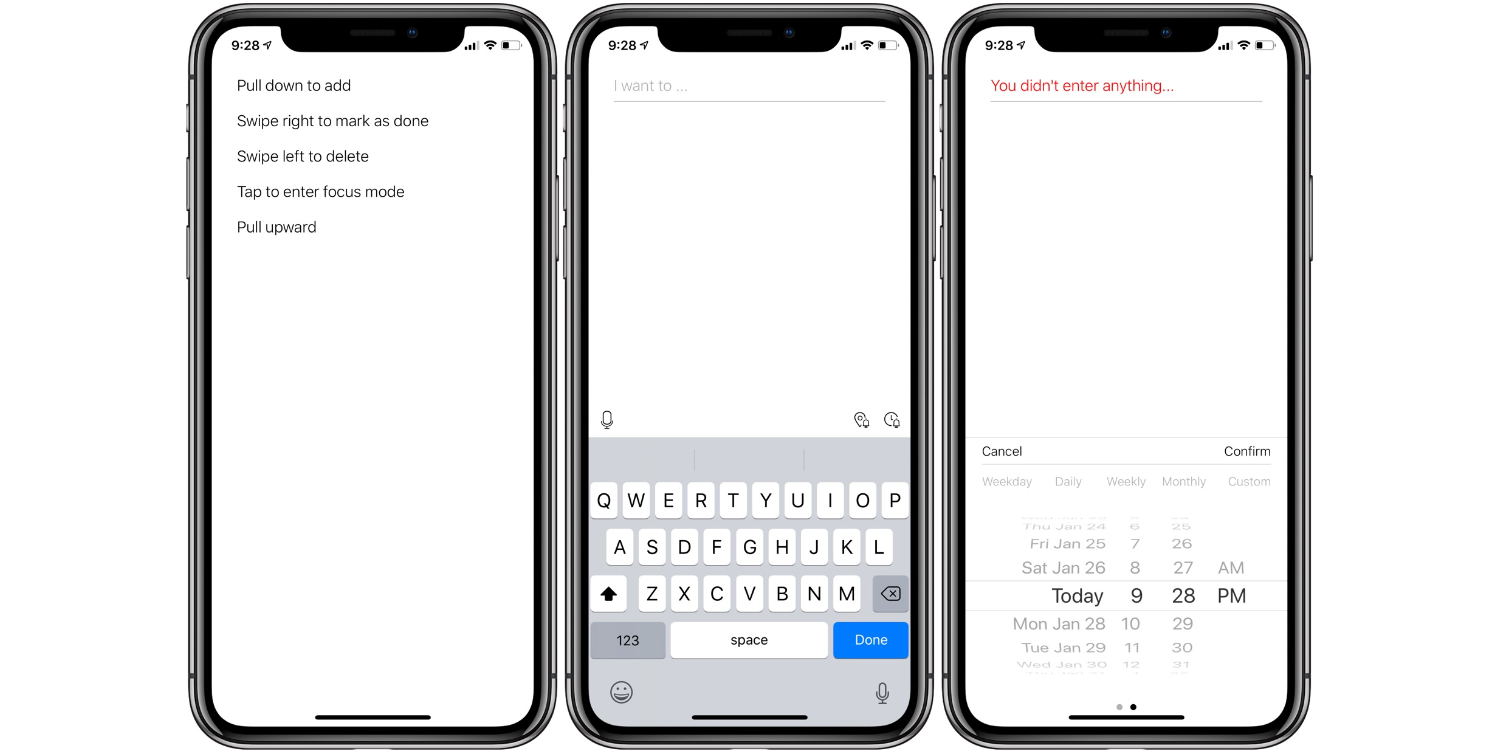 MinimaList comes close to being the perfect simple list app. I have a minimal design, which I like, but I find the UI a bit hard to navigate. I originally couldn’t find out how to have multiple lists, but then I finally fiddled around enough to find a place to upgrade to MinimaList Premium for $5.99. The in-app purchase unlocks FaceID, custom fonts, multiple lists, location reminders, and more.

MinimaList is a free app on the App Store. 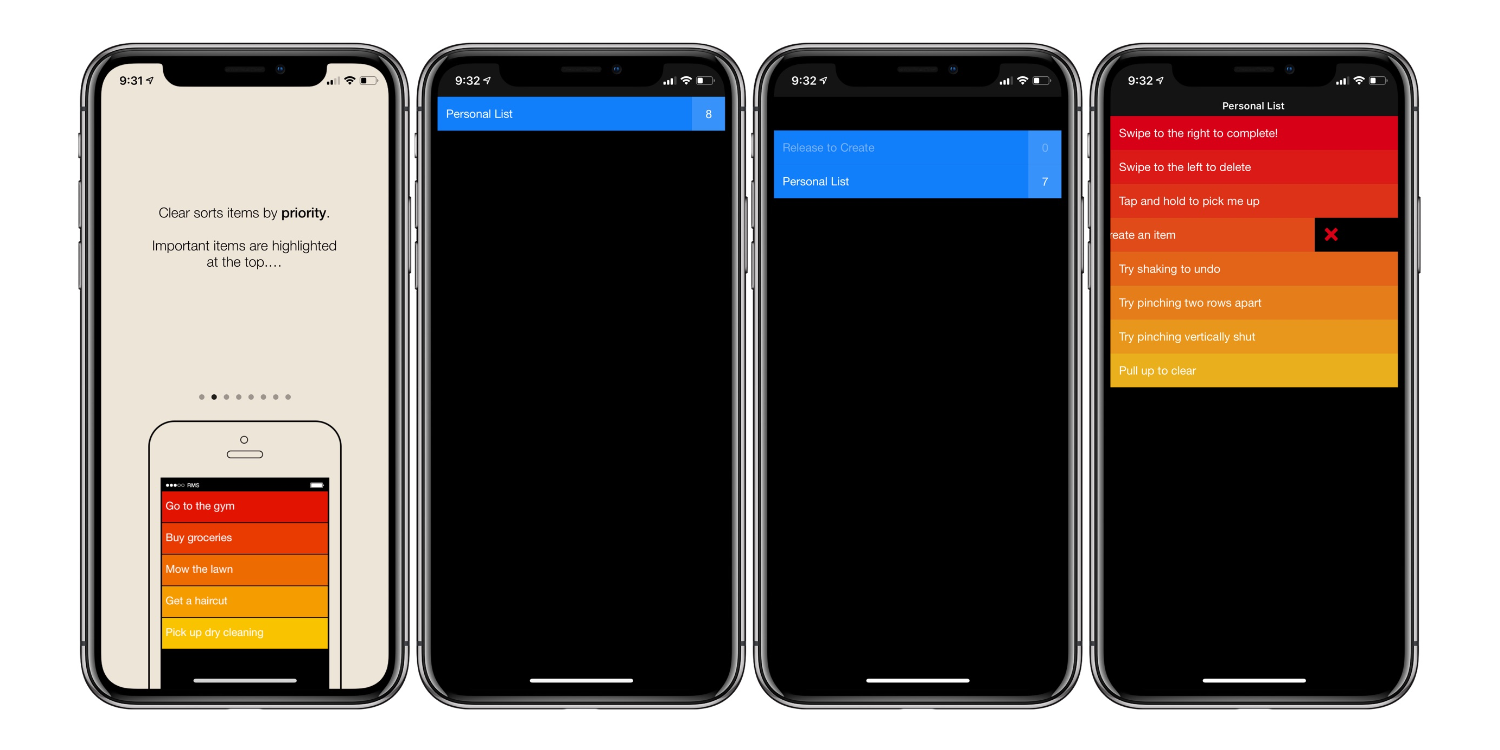 Clear, in my opinion, is the absolute best list app for the iPhone. While I probably prefer the UI of MinimaList, Clear is just lightning fast on everything. It’s straightforward (and fast) to add a new list, add new items, and mark items as complete.

While it was missing in action for a year or two, it’s under new ownership, and they’ve been actively developing it. When it comes to creating simple lists that I don’t want in my GTD/task management system, Clear is my go-to app.

While there are many good simple list apps for iPhone, Clear is my favorite, and I’d probably put Reminders as a runner-up. Reminders being built-in certainly helps it, but Clear edges it out since it’s so fast to enter new items. Do you have a favorite list app I missed? Let me know in the comments.